BETRAYED: The True Story of Extortion 17

Two years after the greatest loss in Navy SEAL history,
the downing of Extortion 17 on 6 August, 2011,
the story is about to be told as only a father of a SEAL
on-board that mission can tell it.

To learn more about Billy and his son Aaron Vaughn, the book, and how the SEALs were betrayed by their own government on that fateful day in Afghanistan, click here or on the book cover. Use the donate button to support the Vaughns while visiting. 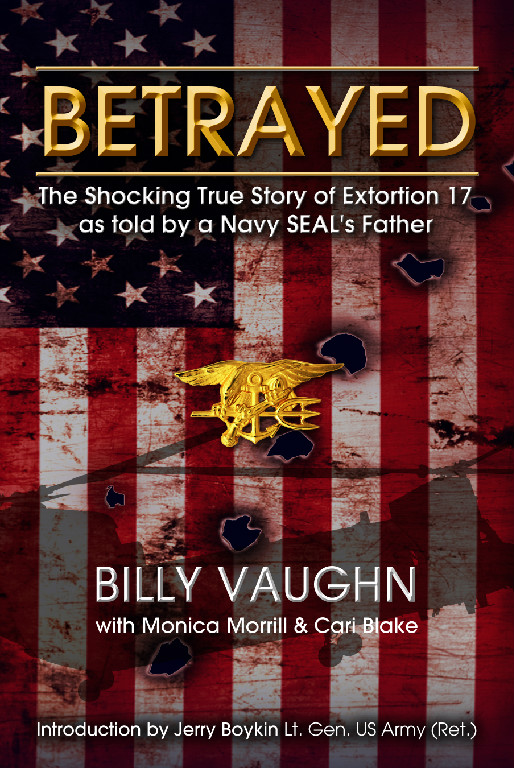 The book Betrayed details events that unfolded on 6 August, 2011 ending in the greatest loss of human life in Navy SEAL history, what went wrong and how it should have been avoided. This book will be the first footstep down in a long legal battle ahead. Billy and Karen Vaughn, supported by a number of other SEAL families and numerous other Navy SEAL’s have set out not for vengeance, but for justice, for son Aaron and all on-board Extortion 17…

They have set a course to make sure that our men and women in uniform are never betrayed again.

NALC attorneys represent the Vaughn family in this effort and the road ahead is long and expensive. NALC is providing expert military analysis, investigation, research and advice, along with legal counsel on the Vaughn’s mission. NALC is handling this case at no charge to the Vaughn family.

This means that the financial support for NALC from USPU and VDA members and special donors is a critical part of this mission, allowing NALC to represent the Vaughn’s in their quest to expose the truth about Extortion 17 and hold those who are responsible for the wrongful death of these brave young men, fully accountable.

With the expressed permission of Billy and Karen Vaughn, we ask for your financial support on behalf of the Extortion 17 mission. We also ask on behalf of other NALC missions underway on Benghazi, Election Fraud, States’ Rights and ongoing Middle East gun-running by the current administration, to name only a few initiatives.

NALC is funded only with your help. DONATE TO NALC NOW!

We want to thank all who have helped make the NALC operation possible with your past support and ask ALL to take a moment to learn more about the Vaughn Family story and NALC, and JOIN the FIGHT for truth and justice.

DOWNLOAD. A House Oversight Sub-Committee has scheduled a first hearing on the events of 6 August, 2011 – Afghanistan – Extortion 17. These are questions submitted on behalf of Billy & Karen Vaughn. Submitted by JB Williams, NALC / NorthAmericanLawCenter.org (You’ll need a free Adobe PDF reader to read this document.) This document has also been posted to Scribd.com.