AMERICANS WITHOUT ANY LEGAL STANDING 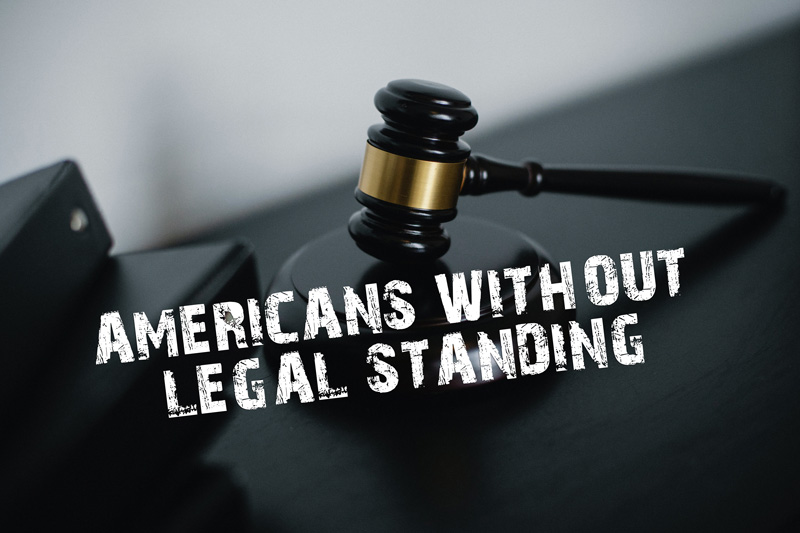 Today, Michigan U.S. District Court Judge Linda V. Parker, appointed by President Barack Obama in 2013, dismissed a case brought by Sidney Powell on behalf of “We the People” — on the basis of “YOU HAVE NO STANDING.”

Moments later in Georgia, as if well-coordinated in advance, Georgia U.S. District Court Judge Timothy Batten, appointed by George W. Bush in 2005, similarly dismissed Powell’s case on the same basis, “YOU HAVE NO STANDING!”

According to these judges and others like them, “We the American Citizens” have no legal standing in their courts. However, non-citizens have legal standing to vote, to vote multiple times, in multiple districts, and have their votes counted more than once, or transferred from one candidate to another by the vote counters.

ALL fifty states will suffer the consequences of massive fraud evidenced in seven states, Michigan, Georgia, Pennsylvania, Wisconsin, Arizona, Washington, and Nevada. But “We the people” have no legal standing in any court to challenge it, much less put a stop to it. In fact, fraud has happened in more states, but these states will determine our future.

According to the “State” Media (ABC, CBS, NBC, CNN, MSNBC, and Fox News), no evidence of any fraud exists. But according to the law, eyewitness testimony by thousands of affiants, via sworn affidavit under penalty or perjury, the best possible form of evidence tells a vastly different story. Many are unaware that all that is required in a Treason case, is two or more eyewitnesses.

What America is presently facing is a full-blown constitutional crisis, wherein non-citizens, criminals, corrupt politicians, and judges, hold all the power in the country. Power over “the People” from which all political power is derived. Sadly, far too many Americans are completely unaware, and others have lost the courage to stand up against tyranny and fraud.

This isn’t about the “stolen election” from President Donald J. Trump. That’s merely one of many steps necessary to enslave every American under boot in a global commune. The fraud is flipping other critical Federal and State races too. This isn’t about Republicans and Democrats. This is WAR for America!

But Americans, “HAVE NO STANDING” to stop it, according to far too many corrupt judges.

CONSPIRACY is defined in law as “an agreement between two or more persons to commit a crime at some time in the future.” In other words, it’s a planned orchestrated event.

There are literally thousands of people involved in the 2020 election fraud designed to overthrow the U.S. Constitutional Republic, and there are literally thousands of eyewitnesses to the crimes committed, who have risked everything to come forward and testify under oath and penalty of perjury, to witnessing those crimes. It was quite clearly planned in advance, and deliberately executed by many.

In fact, any and every act designed to overthrow our Constitution and our Republic is an act of treason, under U.S. Law.

Yet even the current case of massive election fraud, designed to betray all Americans and provide aid and comfort to enemies, here and abroad, is being allowed to pass as though nothing is happening. All due to an alleged “lack of legal standing” in Federal and State courts. The “State” Media provides the getaway car, and this only widens the conspiracy to commit treason to include members of the Judicial Branch and media.

STANDING is defined in law as “the term for the ability of a party to demonstrate to the court sufficient connection to and harm from the law or action challenged to support that party’s participation in the case.”

If the People, from whom all political powers are derived, who stand to lose everything, their country, their freedom, their livelihoods and sooner or later, their lives, do not have “standing,” then no one on earth has standing and our entire system of government has already collapsed.

MISPRISION OF TREASON is defined in law as “the deliberate concealment of one’s knowledge of a treasonable act or a felony.” Hello, “State” Media and social media giants!

Every actor, politician, judge, legislator and member of the news media, that has “deliberately acted to conceal their knowledge of a treasonable act or a felony,” has committed “misprision of treason.”

Massive volumes of evidence have been collected and organized for presentation, from literally thousands of eyewitnesses, under penalty of perjury, existing in at least seven states today and the whole worlds knows it.

NO STANDING – NO ACTION