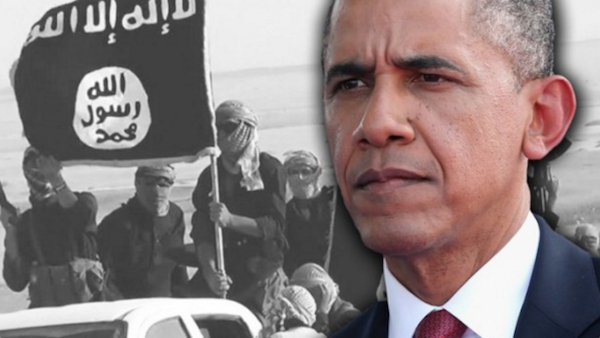 Even the Vice Chair of the DNC and Bill Maher are openly accusing the Obama regime of aiding and abetting ISIS and the Muslim Caliphate…. (send this to your House Rep and keep making calls)

Millions of Americans tried to stop the election of Barack Hussein Obama in 2008, correctly exposing the fact that this is an individual that has no verifiable past and a laundry list of highly concerning associations with well-known anti-American bedfellows. But the system was already broken to a point in which such an individual could scam their way into power, regardless of the overwhelming evidence that he was neither constitutionally eligible or morally fit for the office of Commander-in-Chief.

Little more than a year after being fraudulently sworn into office, calls for impeachment started in May of 2010, as visible evidence of anti-American destructive policies were already emerging in the Obama Administration.

In May of 2010, Republican House Rep Darrell Issa called for impeachment over the White House’s tampering with the re-election of Arlen Spector, a close comrade of Obama’s who was set to lose to challenger Joe Sestak had Obama not bought Sestak out of the race.

In August 2011, Republican Congressman Michael C. Burgess of Texas stated that the impeachment of Barack Obama “needs to happen” in order to stop Obama’s clear agenda to drive America into socio-economic collapse.

By May 2013, calls for impeachment were becoming almost a daily event, as Republican Senator James Inhofe of Oklahoma stated that “President Obama could be impeached over what he alleged (now confirmed) was a White House cover-up after last year’s attack in Benghazi, Libya.”

In August 2013, Republicans Tom Coburn, Blake Farenthold and Kerry Bentivolio had joined the growing chorus of House members openly calling for the immediate impeachment of Barack Hussein Obama on a growing list of impeachable offenses, as the nation was now spiraling towards a crash of monumental proportions.

On August 19, 2013, Republican Congressman Kerry Bentivolio stated that if he could write articles of impeachment, “it would be a dream come true.” He enlisted the of several key historians and experts to assist in that effort, but no Articles were ever completed or filed.

On December 3, 2013, the House Judiciary Committee called to order a meeting titled “The President’s Constitutional Duty to Faithfully Execute the Laws,” seen by many as an initial step towards impeaching the most impeachable administration in U.S. History, but the content and context of that meeting would remain behind closed doors… and the outcome was the same as in the past, no action.

Meanwhile, the nation remained on a path to death and destruction with Obama at the helm and calls for doing anything real about it, were now being squelched by House Speaker John Boehner and Senate Leader Mitch McConnell, who had let it be well known that “impeachment is off the table,” despite growing desperation in the hearts and minds of millions across America, frustrated by the overt cowardice in the RNC leadership.

Fast forward to October 31, 2015… when Vice Chair of the Democratic National Committee Tulsi Gabbard, took to the stage with none other than hardcore leftist Democrat Bill Maher on Real Time, and openly stated on global TV that her Democrat Commander-in-Chief has been engaged in aiding and abetting ISIS and many other Islamic terror groups across the Middle East, in support of the global Muslim caliphate, resulting in the death and destruction of countless sovereign nations, thousands of innocent people and threatening the security and sovereignty of the United States.

Astonishingly, Bill Maher had no choice but to agree… and finally, leftists in the Democrat Party were forced to admit on open air that the leader of their party had gone rogue, becoming the greatest threat to national security from within the halls of the people’s White House…

As House Republicans had worked for seven years to avoid their sworn constitutional duty and oath to the US Constitution, to make certain that the Oval Office occupant would “faithfully execute the laws of the land” as passed by Congress, and uphold, protect and defend the US Constitution against all enemies, foreign and domestic, the greatest threat to it all was allowed to operate against the United States from the helm of the U.S. government.

Obama’s democratic administration had become destructive towards the United States and even Gabbard and Maher could no longer ignore it. Let there be no mistake… They were not discussing Clinton’s semen stained intern dress, or partisan spying on political offices, like in Watergate. They were openly confirming “acts of treason” by the Obama administration.

Still, the search for anyone in the Republican controlled House with the honor, decency and courage to keep their oath to America continues… Despite all of it, not one member of the Republican controlled House has as of yet, grown the stones to stand up and defend the Constitution and American people from what every red blooded American knows is the most evil anti-American criminal regime to ever hold political power in the United States.

Articles have already been investigated, researched and carefully drafted… not by a member of the House, but by a private non-partisan legal group, The North American Law Center, (TNALC). In fact, the most complete and accurate set of Impeachment Articles were carefully crafted and released by the group, to both Congress and the public, in July of 2014.

In a recent TV interview on One America News Network, Lead Counsel for TNALC Stephen Pidgeon explains why the group did the work and why they are building a national coalition of impeachment supporters in an effort to force Republicans in control of the House to act on their oaths and impeach immediately.

Retired Constitutional Attorney Hal Rounds makes the case for impeachment in this video. Over 2 million Americans have signed petitions to impeach and high profile media figures like Allen West, Sarah Palin, Mark Levin, Michael Savage and Rush Limbaugh have all openly called for impeachment. Still, no action from House Republicans.

As Obama works to import a hundred thousand more military age jihadist “refugees” from war torn Syria, a direct result of yet another effort by the Obama regime to illegally topple another foreign government giving rise to more Islamic extremism, House Republicans continue to play politics as if positioning themselves for the next propaganda based election cycle is the only thing that matters in this world.

Likewise, “the people” are trapped in an endless election cycle, caught up in which fraud candidate will save them from themselves in the next election, refusing to hold anyone accountable for anything in DC, including death in Benghazi, on Extortion 17, mass illegal invasion, the importing of Islamic terrorists via bogus refugee resettlement, a debt spiral unparalleled in human history, a collapsing ObamaCare and U.S. economy that threatens the U.S. currency, and, well, I could write and entire encyclopedia volume of the treasonous and traitorous acts by these criminal thugs.

Why are people worried about Hillary Clinton in 2016 when they could end her political career and throw her in prison for her crimes in a 2015 Obama impeachment trial? Have “the people” not only lost their courage to be free, but their minds too? Are “the people” morally unfit as well?

Is there anyone in America willing to fight for what is right? Willing to uphold, defend and enforce the US Constitution? Anyone, anywhere?

The answer is YES… Everyone at The North American Law Center is ready, willing and able… and so are the members of the national coalition for Impeachment.

As a matter of fact, so are at least a few House Republicans…

This is a list of the ten most likely to impeach in the House, some of whom are already working with TNALC to advance the TNALC Articles of Impeachment against Obama before the clock runs out. CALL ALL OF THEM, EVERY DAY!

Where are YOU? What are YOU doing to save our Constitutional Republic?