Ted Cruz is in the U.S. Senate Illegally?

TED CRUZ IS IN THE U.S. SENATE ILLEGALLY?

US Senator Ted Cruz, from Texas, has been under fire in his bid for the White House due to his Canadian citizenship records which make it quite clear that he does not meet the Constitutional “natural born Citizen” requirement for the Oval Office, despite the opinion letter from his Harvard friends.

Following a total lack of vetting on Barack Hussein Obama in 2008 and 2012, many insist that no one ever enter the Oval Office again without proper vetting, including proof of meeting all Constitutional requirements for office. Obama’s massive destruction of our Constitutional Republic has placed the issue of Constitutional eligibility on the front burner for many Americans, and partisanship has nothing to do with it.

In the effort to vet every 2016 presidential candidate, Cruz, who had once stated that both he and Barack Obama were ineligible for the Oval Office, found himself under tight scrutiny from the same people who tried to stop Obama from taking the Oval Office via fraud. Ted placed himself in the crosshairs of constitutionalists who do not care about partisan politics, by seeking an office he is not eligible to seek.

The Constitutional requirements for the US Senate are as follows;

“No Person shall be a Senator who shall not have attained to the Age of thirty Years, and been nine Years a Citizen of the United States, and who shall not, when elected, be an Inhabitant of that State for which he shall be chosen.”

At 42 years old in 2012, Ted Cruz obviously met the age requirement of 30 years. However, he also needed to meet the requirement of at least “nine Years a Citizen of the United States.” As the Constitution states, one cannot be just an “Inhabitant of that State for which he shall be chosen.”

The known source for the Founders use of the term natural born Citizen, The Law of Nations, also defines “Inhabitant” as follows;

“The inhabitants, as distinguished from citizens, are foreigners, who are permitted to settle and stay in the country. Bound to the society by their residence, they are subject to the laws of the state while they reside in it; and they are obliged to defend it, because it grants them protection, though they do not participate in all the rights of citizens. They enjoy only the advantages which the law or custom gives them. The perpetual inhabitants are those who have received the right of perpetual residence. These are a kind of citizens of an inferior order, and are united to the society without participating in all its advantages. Their children follow the condition of their fathers; and, as the state has given to these the right of perpetual residence, their right passes to their posterity.”

Today, the legal term for this condition in the United States is “illegal alien,” someone in our country and living under U.S. jurisdiction, without legally belonging to society. Modern social justice attitudes often refer to these people as “undocumented citizens” which of course are not citizens at all. Our I.R.S. created a new class of “citizen” for the purpose of collecting taxes from illegal aliens, “resident alien” which is an inhabitant (not a citizen) who pays taxes.

Contrary to current leftist social justice ideologies that view all “illegal aliens” in the U.S. as only “unauthorized” or “undocumented” citizens, our laws identify them as nothing more than “illegal aliens,” or “resident aliens” who pay taxes under I.R.S. codes.

Further, in any matter of law, authenticated evidence supersedes any and all politically motivated opinions, especially opinions which are either unfounded or poorly founded. Unlike Barack Hussein Obama who posted three forged U.S. Certifications of Live Birth and later a Hawaiian newspaper announcement of his birth to evidence his Oval Office eligibility, Ted Cruz issued his Canadian Birth Certificate as evidence of being “born a citizen of Canada.” 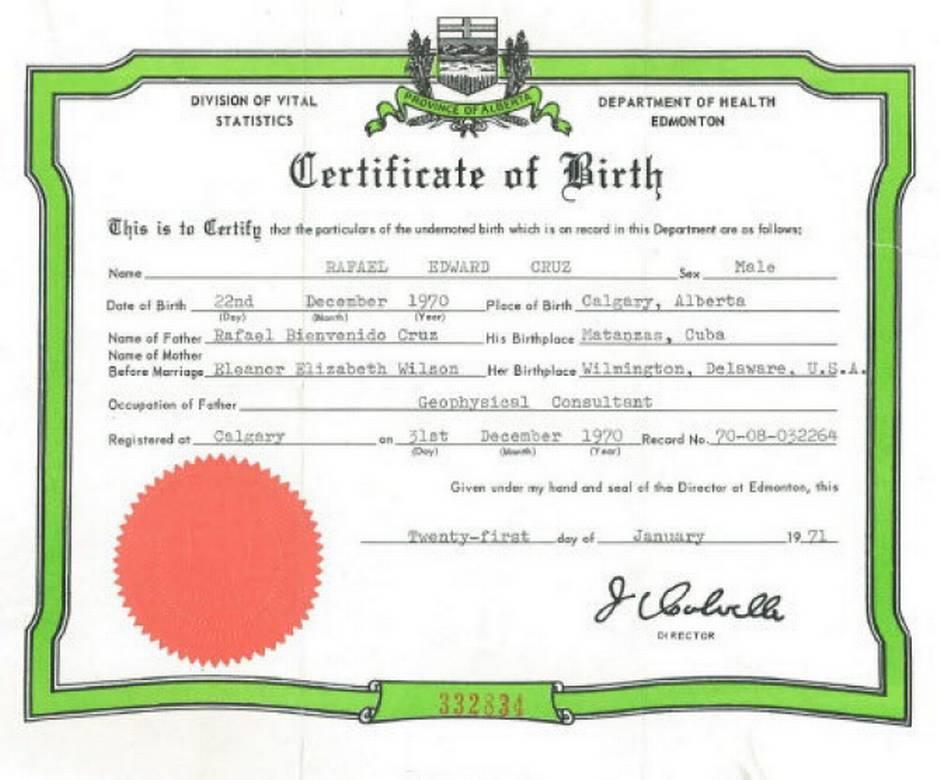 The above Canadian document is proof of Canadian Citizenship at birth for Senator Ted Cruz. The next piece of authenticated evidence released by Ted Cruz is a Canadian document proving that he remained a legal citizen of Canada until renouncing that citizenship in May of 2014, which means, he was still a legal citizen of Canada in 2012 when he ran for, was elected and took the oath of office for the US Senate. 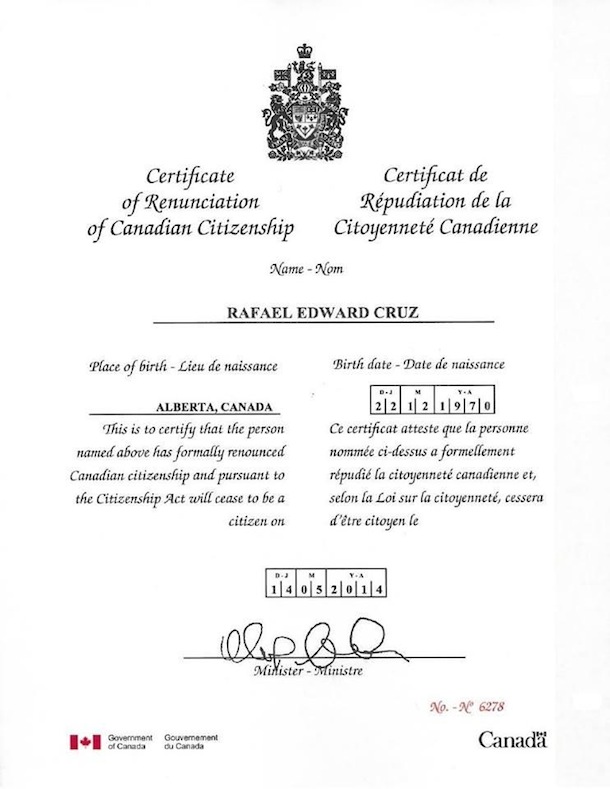 As a result of this damning evidence, the Cruz campaign hired friends at Harvard to issue a letter which makes a legal case for how Ted Cruz (and Barack Obama) might be a natural born Citizen of the United States eligible to seek the Oval Office. However, a legal opinion letter is not equal to, nor does it supersede authentic evidence to the contrary.

It is possible for a child to be born outside of the United States, and still acquire legal U.S. citizenship at birth through a parent, according to U.S. Naturalization codes pertaining to “Citizenship at Birth for Children Born Outside the U.S. and its Territories.” If the related conditions are met, a child born outside of the United States to one U.S. Citizen parent, in this case, Ted’s mother, the parents can file for and receive U.S. Citizenship for the child by filing a CRBA form with a U.S. Consulate at the time of birth.

“A child born abroad to a U.S. citizen parent or parents may acquire U.S. citizenship at birth if certain statutory requirements are met. The child’s parents should contact the nearest U.S. embassy or consulate to apply for a Consular Report of Birth Abroad of a Citizen of the United States of America (CRBA) to document that the child is a U.S. citizen. If the U.S. embassy or consulate determines that the child acquired U.S. citizenship at birth, a consular officer will approve the CRBA application and the Department of State will issue a CRBA, also called a Form FS-240, in the child’s name.”

According to related U.S. laws governing “Citizenship at Birth for Children Born Outside the U.S. and its Territories,” the following conditions had to be met in order for Ted Cruz to legally claim U.S. citizenship at birth via these naturalization statutes, through his mother.

The U.S. citizen parent had been physically present in the U.S. or its territories for a period of at least five years at some time in his or her life prior to the birth, of which at least two years were after his or her 14th birthday.

If the U.S. citizen parent spent time abroad in any of the following three capacities, this can also be counted towards the physical presence requirement:

Ted’s parents were at no time serving in the U.S. Armed Forces, employed by the U.S. Government or by any of the certain international organizations, during their eight years in Canada, between 1966 and 1974. Further, Ted’s father Rafael, was at no time a legal citizen of the United States prior to naturalizing in 2005, from Canada. Rafael’s known legal citizenship status as of 1970 was Cuban, not American.

This is an EXAMPLE of a US CRBA Form: 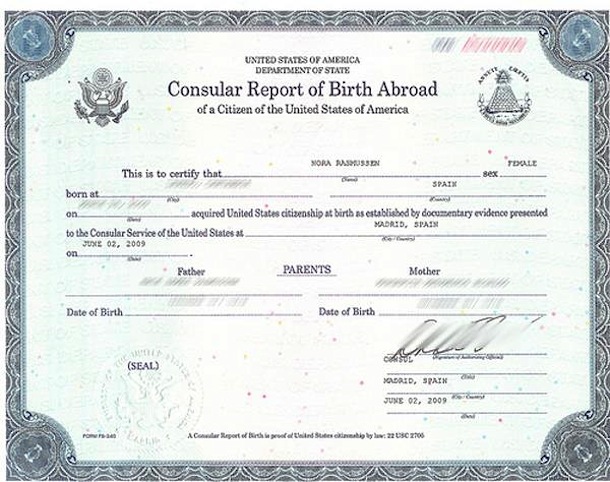 As a result, there remains no authentic evidence to support the claims that Ted Cruz is either a “natural born” or “naturalized” citizen of the United States.

Without any form of U.S. Citizenship documentation, and proof of Canadian citizenship at birth in 1970 and holding that legal status until May 2014 when he renounced his birth citizenship to Canada, there is no way for Ted Cruz to prove that he is either “natural born” and eligible for the Oval Office, or “naturalized” prior to 2012, when he sought and accepted a seat in the U.S. Senate as a legal citizen of Canada.

On the basis of all available evidence today, Ted Cruz is in fact holding a seat in the U.S. Senate illegally, with no documented proof of legal U.S. citizenship whatsoever, and proof of Canadian citizenship between the years of birth in 1970 and May 2014.

It is unfortunate that a person so many have placed their political faith in has proven willing to defraud his supporters for both votes and millions in campaign donations. But it is better we know now, than after he wins the GOP nomination only to be destroyed by Democrats later, using the same facts and evidence presented here.

What will the people do with this knowledge? Are they really motivated by restoration of Constitutional compliance, or mere political expediency?

of this article to email and share with others. (You will need a free adobe reader to view this document.)