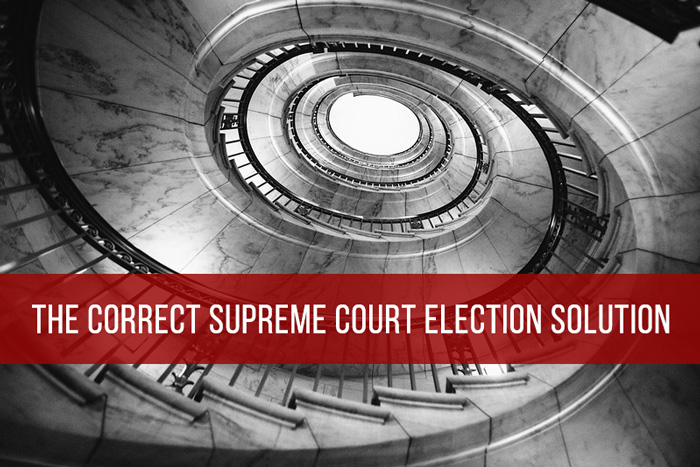 As the Democrat party media continues its charade, pretending as though Joe Biden won the 2020 presidential election fair and square, the nation moves towards a war between the states over unprecedented evidence of massive election fraud.

Allow me to correct the false narrative out there, everywhere…no one (except Trump maybe) is seeking to “overturn the election” or the election results. We are all trying to “eliminate any and all known fraud from the process” to arrive at the correct, the real election result. Let there be no mistake.

The precursor to all-out civil war now sits at the U.S. Supreme Court in a suit against four criminal fraud states, Georgia, Pennsylvania, Michigan, and Wisconsin, filed by Texas on December 7 and supported by at least 22 other states. Even Pennsylvania legislators have joined the Texas case, against election criminals of their own state. More than a hundred members of Congress have also joined in support of the Texas case.

D.C. attorneys have since filed a brief to allow numerous democrat-controlled states, to file amici briefs in defense of the four criminal election states targeted in the Texas suit. Battle lines have been drawn and only the U.S. Supreme Court can take action to prevent hostilities between these states from escalating to war, or even a potential breakup of the union.

The court must answer only four questions in this case…

Questions 2 and 3 have already been answered in a massive flood of evidence circulating the Internet every day since November 3rd, despite the blind eye of the democrat party media, social media, democrat defenders of the fraud and a massive effort to coverup the fraud for mere political gain.

Question #1 can swing either way, depending on the current makeup of the Court, the political pressure on the court and the political whims of the Justices on any given day or case. Sadly, Federal Courts have often ruled against the people, the law, the Constitution and Bill of Rights over the years. The high court itself has taken “unconstitutional” positions on many cases, due to their own political biases and sometimes immense political pressure to do so.

Question #4 — What could, and should the U.S. Supreme Court do about this mess?

Assuming that the Court is going to rule on the basis of law and not on the basis of political agendas and pressures, they must hear the case and evidence of both fraud and unlawful alterations in election laws, must matter. They must find the right “constitutional” and “ethical” solution, under the law and their Oaths to protect, uphold and defend the Constitution and apply the law equally, without political prejudice.

Once the Court has confirmed that — 1-they must rule on the basis of law, 2- the states did unlawfully alter election laws, and 3-it resulted in significant irregularities and fraud in the election processes, they must take appropriate action to prevent any further escalation of hostilities between the states.

By doing this, the court will have taken the action necessary to uphold and enforce the law, remove the fraud from the election results, staying out of partisan agendas and returning the responsibility of elections back to the States, in a free, fair, impartial and constitutional manner. By this method, the high court did NOT “pick a winner.” They simply upheld and enforced the Rule of Law, equally. They will restore election integrity.

In doing this, the high court will have fulfilled its most solemn duty and critical role under its original jurisdiction authority, to settle conflicts between the states in a fair, lawful and peaceful manner, which is the entire purpose of the Supreme Court original jurisdiction.

Those Responsible for the Mess

Those responsible for this near fatal disaster are those who altered the election laws unlawfully, opened the door for massive election and voter fraud, and tried to cover it up while running out the clock, all for mere political gain.

The people who have exposed and challenged their actions, are not responsible for this mess. They are only responsible for trying to expose and remedy the mess before the nation proceeds to a war between the states and an inevitable breakup of the Constitutional Republic.

Four corrupt states will NOT be allowed to destroy this country. Nine Supreme Court Justices will decide the manner in which this conflict is settled, by Court Order and the Rule of Law, or by blood running in the streets. Either way, freedom, liberty, and justice will prevail. The high court will decide at what expense to the nation.

CITATION OF LAW — “Section 242 of Title 18 makes it a crime for a person acting under color of any law to willfully deprive a person of a right or privilege protected by the Constitution or laws of the United States.” — Unlawful alterations in election law by individuals in the four defendant states, acting under “color of law,” giving rise to massive election fraud in their states, resulted in the criminal deprivation of the Rights and Liberties of all “legal” voters within the United States.

Categories : 2020 Election, Democrats, JB Williams, NALC News, SCOTUS
← Previous
THE SWAMP – HOW BIG IS IT?
Next →
AMERICANS WITHOUT ANY LEGAL STANDING