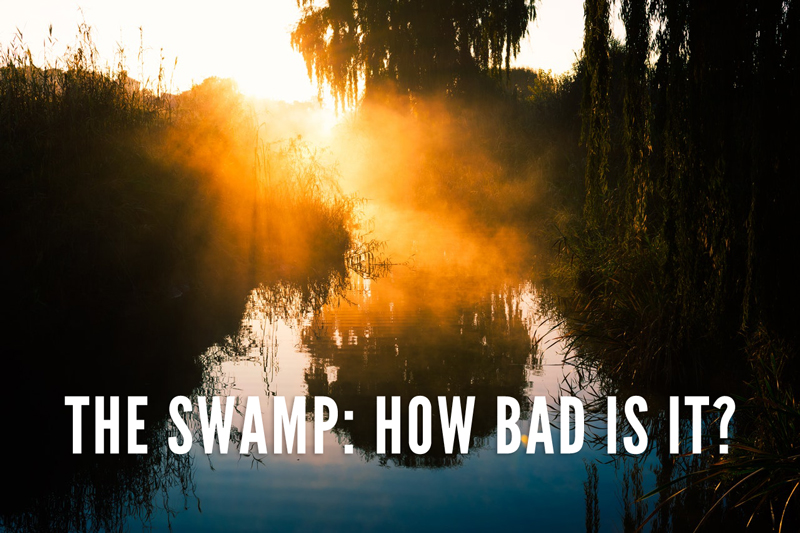 Even though billions of people all over the world witnessed massive election fraud in the USA on a scale never before seen, the swamp continues to insist that no such fraud took place and that there is no evidence to prove otherwise.

The swamp repeatedly beats the drum of false information, convincing many fools that they are right, and hoping that sooner or later, if they tell the lie often enough, long enough, even otherwise intelligent people will eventually believe it’s true.

Here’s why the swamp is winning and why it’s likely to consume our beloved country in less than 30 days from today.

You No Longer Believe Your Own Eyes

Oh sure, you all saw the fraud taking place with your own eyes. You saw election results flipped over night, as hundreds of thousands of trucked in Biden ballots arrive in the dark of night, after the polls closed and after all poll watchers were sent home or removed from the counting rooms. But do you believe what you saw?

A bomb was detonated on 2nd Avenue in downtown Nashville TN on Christmas morning. The current public narrative claims the event was the work of another “lone wolf” bomber with no previous history, who detonated his RV after broadcasting a loudspeaker warning for everyone to evacuate the area in advance of the blast.

Yes, “fake news” is the only kind of news we have today, no matter which is your favorite news source. Not one single major news outlet tells the truth, the whole truth and nothing but the truth today. Secondary independent news sources are full of wild conspiracy theories as they try to find truth in a sea of lies. Like a broken clock, they might get it right twice a day.

A quick internet search for medical studies done over many years to determine the effectiveness of face masks to prevent the spread of any virus, will quickly turn up two opposite results now. First, you will see all of the “Google approved” links of recently posted government approved narratives and opinions by “government experts” supporting the use of the masks. But if you keep digging, you will find numerous actual studies done over many years, all of them confirming that face masks are totally useless in preventing the spread of any virus. Which reports do you believe?

All of your life, you were taught to believe that our courts exist to provide a peaceful legal means and process for finding true justice. You thought that every legal American had a right to due process of law, to be innocent until proven guilty in a court of law that applies the laws equally to everyone, no matter race, creed, or color. But now you know that even the President of the United States, more than 20 States and over 74 million Trump voters, have no right to due process in the courts at all, as every court in the country refuses access to present evidence of massive election fraud in their chambers.

But the swamp is telling you that “Trump lost every case filed in all these courts.” How do you lose a case you were not allowed to present? When someone is denied entry to present evidence to the court, did they “lose the case” on the merits of the evidence, or were they simply denied due process of law? Which do you believe?

We all know that COVID19 was weaponized for the 2020 elections. Without it, there would have been no mail-in voting and only the usual level of cheating, not enough to defeat Trump, who got more than 10 million more votes in 2020 than he got in 2016, setting records from numerous “minority” voting groups, while hitting an all-time high among regular GOP voters. But what is the swamp telling you? Which version of reality do you believe? The one you know, or the one they tell you?

Do you believe what you see, or what you’re told to believe?

World history is full of examples of socialism and communism failing, 100% of the time. Still, what have the young voters been dog whistle trained to believe? That free stuff actually exists, and is preferrable to freedom?

You have been told by the CDC that over 350,000 Americans have died from COVID in 2020. You have also been told by the CDC that only 6% of those deaths (21,000) were actually deaths from COVID alone. 94% were dying of something else and may or may not have “tested positive” for COVID, with or without any COVID symptoms. So, which CDC reports do you believe? The ones you KNOW are true, or the ones you are told to believe?

How Bad is the Swamp?

Because most Americans no longer believe their own eyes and ears, or their gut instincts, they are easily susceptible to the powers of suggestion. Today’s Americans grew up with TV and Radio, accustomed to both telling them what is going on in their cities, country, and world. Even though most know they are watching “fake news” and even say so, among friends, they still believe almost everything the TV or Radio tells them.

And THAT…is how bad the swamp is!

People who will believe anything, will fall for anything. They are easily controlled and manipulated, and will “go along to get along” just in case the “fake news” might be right this time.

According to the swamp, Trump and Senate Republicans don’t want you to have your so-called “stimulus” money from the Nanny Gov. Is the news media telling you that 80% of that congressional bill was spending for foreign countries? Are they telling you that this is what Trump and Republicans want to strip from the bill, before sending you another government handout? Which story is true? Do you even know anymore? Do you even care anymore?

How many of you “patriots” are howling for your stimulus check, while opposing socialism? Why haven’t you already reopened your businesses or returned to work, so that you don’t need a check from Nanny Gov? Because someone told you not to?

Most Americans think they work for the government now. They must, or they would be issuing orders to their public servants, instead of taking orders from them…

The “swamp” is nearly everyone in a government position of any kind today, no matter what party they claim to belong to. It’s also nearly everyone in National Security and the Military, as well as State and Local Law Enforcement, public education, and academia. Yes, the swamp has been allowed to flourish in America, to become the “majority” in America. It’s vast…to put it lightly…and…it includes most of you!

But it can only exist because of YOU, us, We the People!

We are sheep being led to slaughter and many of us know it, but fail to do anything to stop it.

The swamp wants us to believe that “there is nothing we can do.” Of course, they do. Why would they want us to believe anything else? And just like the masks and the RV bombing fairy tales, most Americans believe them.

Many say, “they are not afraid of us anymore!” …and they are right, they aren’t! They have no reason to be! What have the American people done that would give them any reason to worry about anything, since 1776?

Nobody is afraid of the average American these days. Why would they be? Americans have allowed themselves to be dumbed down, drugged up, displaced, divided, and discouraged for decades. They look like the perfect society to take over…fat, dumb and happy to go along, to get along. There won’t even be a fight!

Americans are currently awaiting their next round of so-called stimulus money, with bated breath. The first round was $1200, congressional democrats wanted the second round to be $600 until Trump demanded at least $2000.

What do you think this will stimulate? Our closed economy? Is it to stimulate your ability to pay your bills, while our public servants continue to force us out of business? If you add the $1200 and $2000 together, it’s $3200 for the year. Does that replace the income they took from you in 2020? Really, at an annual average of $61.53 per week? This will solve your problems?

It will only stimulate what it is intended to stimulate…it’s sit down and shut up hush money, a bribe, to help you go along to get along, while they finish off our country! For $600-$2000, most Americans will indeed sit down and shut up! You’re being bribed with only 20% of the “stimulus” bill, with the other 80% being sent overseas, to be funneled back to the DNC via international donations through Act Blue. Rather than standing with Trump to stop that 80%, you’re only focused on the 20% that the swamp keeps you focused on.

Or, Have Americans Finally Had Enough?

After everything that have been done to them in 2020 under COVID-TYRANNY, if they still haven’t had enough, then we’re all done here, we’re out of time.

On January 3rd, the new-norm congress will be seated. On January 5th, the Georgia Senate runoff will be counted, with over 2 million illegal Stacey Abrams mail-in ballots already collected and GOP voters casting their ballots on Dominion voting machines. Meanwhile, many so-called “conservatives” are telling GOP voters to “boycott the vote.” It’s not mandatory for anyone to vote, so, all this does is help democrats steal the last two seats they need to control the US Senate. BRILLIANT!

Then, we will see whether or not the American people have had enough or not. We will see what We the People really stand for… Do you believe what you know is true, or what they tell you is true?

Who are we and what do we stand for now?