WHY U.S. CHILDREN ARE KILLING 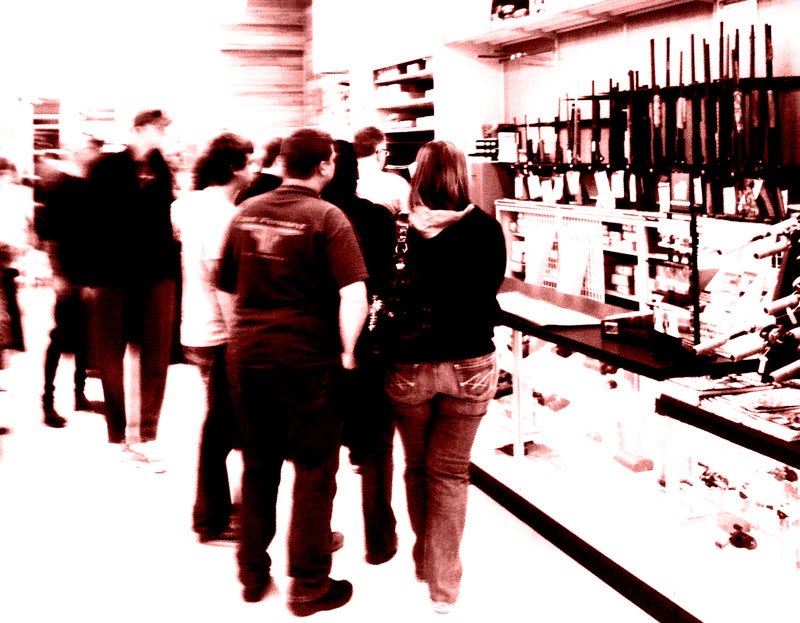 In the last 24-hours before writing this piece, 20 more innocent people were murdered at an El Paso Texas Walmart, and 10 more at a Dayton Ohio night club. In both cases, it appears yet again, to be at the hand of a young lone-gunman, targeting random people, who were unarmed and defenseless in a “gun-free” zone.

The problem today isn’t just about the mass murder of innocents in gun-free zones either, most often at the hand of a very disturbed youth. We lose far more children every year to suicide, over 47,000 per year in the United States. I believe these two realities are directly connected…. Most choose to take their own lives, while a few choose to take the lives of others.

DISCLAIMER: Before I go any further, let me state for the record that I am not a psychologist, psychiatrist, or child behavior PHD. I’m just an old guy who grew up at a very different time in America, a time when things like this never happened! I am full of life experience and I have spent a lifetime noticing things, that most people ignore.

As democrats look at every mass shooting event and draw a straight line to private gun ownership and the need to disarm all law-abiding American citizens, for obvious reasons, evidence might pinpoint the real root of the problem…

WHY ARE U.S. KIDS KILLING?

Guns gave been a staple in nearly every American home since the Pilgrims landed at Plymouth Rock. For most of our 243-years as a well-armed, free, sovereign nation, the events we see happening today in our country, simply never happened.

July 1984 marks the first of the random mass-shooting events in our country, when 41-year-old James Huberty shot dead 21 people, wounding 19 others in a mass shooting at a McDonald’s restaurant in San Ysidro, a district in San Diego California.

Our country went for 208-years as the most well-armed citizens on earth, without a single mass shooting of the kind we witness far too often today. What changed, between 1776 and 1984, that continues to be a growing threat?

Is it that more American homes have guns today than prior to 1984? Is it that more homes have “assault weapons” today than ever in the past? Is it that gun manufacturers, sellers or the NRA are promoting or inciting these types of behavior? None of these factors are true… In fact, as a percentage of overall society, we have less gun owners today than we ever have in history. Further, gun violence is more than ten times more likely to happen in a state with the most strict gun laws…

SO, WHAT HAS CHANGED?

I submit the following known “facts” for your consideration. Because if we don’t find and deal with the root causes for these events, they will continue and even get much worse:

The U.S. Supreme Court ruled in Roe v. Wade that it was a “constitutionally protected right” of any expecting mother to murder her child in the womb. For the sake of political correctness we call it “abortion.” But let’s not kid ourselves, the taking of another innocent life, not as a result of self-defense, is the legal definition of murder. Prior to this Supreme Court ruling, the mother’s womb was the safest place on earth for any child. Since that ruling, it has been by far the most dangerous place on earth for any innocent child. But that’s just the beginning of the problem this ruling created…

The Roe v. Wade ruling set a new standard in America. Human life no longer had any real value beyond the value which the birth mother had allowed. It set a socially acceptable tone in America wherein “children” have no intrinsic value and NO “Right to Life.”

Since this 1973 ruling, 61 million innocent American children have been “aborted,” murdered in cold blood. And most Americans can’t figure out why young adults place no value whatsoever on innocent human life… It all started right here! Only 11-years later, we saw the first mass shooting of innocents in a public place…

In contrast to the Ozzie & Harriet days of the nuclear family, when the father was the bread-winner and the mother raised the children, a number of things brought about the two-income household, where both father and mother left the children behind to work outside the home.

The search for “gender-equality” in the workplace overlooked the reality of no one left at home to raise the children—or worse, left the child-rearing to someone else—often untrained total strangers in a daycare. The term “latch-key” kids was born, where children often returned home after school to an empty house and left to their own oversight.

To make matters even worse, no longer was it socially acceptable to have a father and mother engaged in the child-rearing process. Now, two moms were just as good, two dads, or even an enclave of neighborhood “blended families.” In other words, as Hillary Clinton once said, “it takes a village to raise a child.” Now, we are seeing exactly what kind of children that village has raised since 1992…

God made it only possible for a man and woman to create a child, because a father and mother are both necessary to the proper upbringing of the next generation of decent adults. But people thought they knew better than God…

Professional psychologists and psychiatrists long ago decided that children should not have boundaries growing up. They shouldn’t have severe consequences for unacceptable behaviors. Parents must be the children’s “friends” and not their parents, once responsible for raising decent human beings.

In the old days, having “ants in your pants” as a kid might mean you were sent outside to use your excess energy to weed the garden, mow the yard, mend a fence or take care of the animals. It might have even earned you a smack in the back of the head, or a swat on your tail.

But psych professionals decided that this was all bad for the children… that it would be much better to place the kid on Ritalin, dope the kid up to control his behavior patterns. So today, we have a nation of young adult raised by the village and drugs, as we try to figure out why generations are hooked on opioids, weed, Adderall, CBD oils… or cocaine and heroin… The PHDs created drug addicts!

#4 – Hollywood and the Media

We didn’t grow up in “timeout” playing Mad World, Mortal Combat, Dead Space, Man Hunt, Resident Evil or Grand Theft Auto in our bedroom. Beyond the occasional scary Halloween flick, there was no mass-glorification of mass murder.

Now, not only do we have generations raised without any respect for human life since 1973, but kids raised on drugs by the village and then trained to murder via some of the most violent materials ever given to a child in the form of Hollywood movies, TV shows and video games, where they learn to admire and perfect the art of killing… without consequence.

Factors are starting to stack up here, and the result isn’t pretty…

#5 – The Political Culture of Death and Destruction

Face it… what do the kids have to look forward to today? The SKY IS FALLING, and we’ll all be dead soon, due to the Global Warming scam. Everyone is a “racist.” Freedom and Liberty are “white nationalism.” National sovereignty means we hate the rest of the world. Support for “legal” immigration means we are “anti-immigration.”

Our generations placed these kids more than $22 Trillion in debt before they could even graduate high school. What in the hell do these kids have to look forward to? According to Democrats!

No wonder most of them vote for Marxism today… they have been taught that they can never make it through this world on their own!

Our kids think they are Global Warming experts before they reach high school, but the average college graduate can’t even balance their own checkbook. They have been taught since kindergarten that America is the “axis of evil” in the universe. That “greedy capitalists” stole their future. That they must have a college degree to get a job, despite the reality that 90% of college graduates never find a job in their chosen career path.

They can recite Marx, Lenin and Mao, but not Jefferson, Madison or Franklin. They believe America is a hate-filled white mans world where they don’t belong and are not welcome. They’ve been taught that the police are their enemies and that only leftist politicians are their friends.

And after all that has been done to these kids since they were fortunately enough to not be aborted by their mother, Democrats use identity politics to pit everyone against everyone. The party of minority groups exists on this basis alone today.

Democrats insist we celebrate everything that divides the nation and nothing that might unite its people, like basic freedom and liberty for all.

In the 24/7 rush to have the most salacious headlines, a chief news media mogul once said, “good news isn’t news, it’s advertising. We charge fees for that!”  Democrat Ted Turner, CNN

The headlines MUST be full of doom, gloom, disaster, hate, bigotry, partisan warmongering, race-baiting, tabloid sex scandals, glorified violence and anti-American rhetoric, because that’s what wins ratings. The 24/7 commercial news industry is NOT driven by facts, it’s driven by profits.

No different than leftist politicians, their power is derived through divisions. The ability to pit American against American, until someone lashes out and creates the next homerun headline, “20 DEAD IN EL PASO!”

Add this all up… (No regard for or value placed on human life) + (the breakdown of the traditional family unit) + (the psych world who stopped parents from parenting, then drugged the kids up) + (Hollywood glorified violence) + (Death culture of leftist politics) + (anti-American public indoctrination) + (Democrat politics of constant division) + (a salacious 24/7 profit driven media) = mass murders in a pending fit of rage, or, 47,000+ suicides per year!

Who’s responsible for it? WE ARE….

The leftists who created this mess and those of us on the political RIGHT who sat quietly and allowed it. We either actively created this death culture on the left (or) sat and watched it be created without doing anything to stop it…. Since 1973……45 years, on the right!

Either way, the buck stops with us.

Yes, the evil leftist politicos in our country, set out to destroy this country by these means and they have done a magnificent job of doing it. But we are no less responsible for allowing them to do it.

If we want these younger generations to stop killing or killing themselves, we must give them a reason to live.

We must STOP democrats from sowing fear, hate, anger, rage and violence in our society or there won’t be a society left worth saving! We must teach GEN X and Z that they can create a wonderful future for themselves, despite the mess we put them in… and we must do it right away!

There is NO other way to stop what’s happening today! God help us all if we don’t fix what NO politician will ever fix!